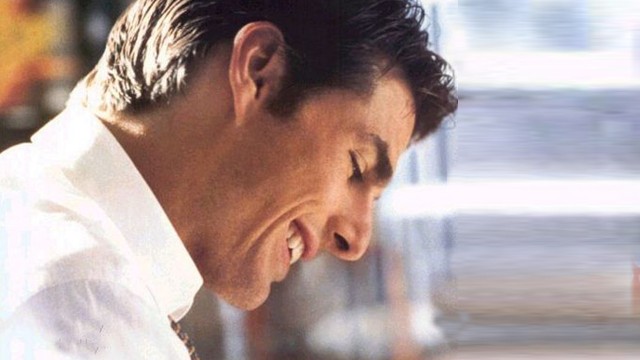 The landscape of the romantic comedy is vast and littered with frothy star-vehicles that aim to hook us with their light-hearted, free n’ easy watch-ability. Hugh Grant, Sarah Jessica Parker, Gerard Butler, Jennifer Aniston have all leant on each other, à la Pretty Woman – starring in films you’ve forgotten as soon as the credits have rolled. It would seem a good romantic comedy is the exception rather than the rule.

There are many things that set Jerry Maguire aside from the usual humdrum. Firstly, it has a winning script. Secondly, it has director Cameron Crowe, literally hitting his sweet-spot right on cue. Last but not least, it sports three luminous performances and possibly the sweetest, most genuinely cute kid ever put on screen.

In the title role of  sports agent Jerry, Tom Cruise channels every ounce of his movie-star charisma, showcasing a dramatic and comic talent that is often overlooked. His performance is both memorable and thoroughly entertaining, and is offset brilliantly by Cuba Gooding Jnrs Oscar-wining supporting turn and Renee Zellweger’s ‘everygirl’ next door, pre-Bridget Jones charm.

For its genre, the structure of the film is straight-up and by-the-numbers, which for me, all the more underlines my belief that if you spend a little time developing and creating characters that resonate in the right way, you can produce a romantic comedy that doesn’t simply rely on concept and star names to sell itself. Sure, Jerry Maguire lays on the cheese, but everything here is so well delivered that it’s mostly earned and doesn’t feel over-egged.

As with most modern-day rom-coms (and Cameron Crowe film for that matter), the soundtrack plays a key role. Songs by folk and rock legends like Bob Dylan, Tom Petty and most notably Bruce Springsteen’s Secret Garden add depth of atmosphere to key dramatic moments. It has moments that have become iconic, and it is that rare thing, an American rom-com with heart beyond its running time. 5/5