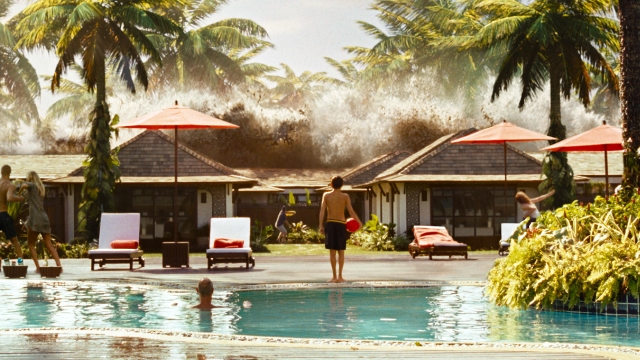 Having endured my fair share of Roland Emmerich visions of global destruction, The Impossible acts as a reminder of how much can be achieved on location, with your actors thrown into the elements to fight it out. As a piece of physical film making, Juan Antonio Bayona’s true story of a family’s desperate attempt to survive the 2004 Indian Ocean tsunami is a firm punch in the gut.

For anyone familiar with this story (most of Spain), the casting of an English family, replacing the Spanish family whose account the film is based on, might serve as an unwelcome beginning. It’s a relief, then, that the actors here are likeable, with more than enough dramatic ability to convey the reality of the situation. Naomi Watts and Tom Holland, playing mother and son respectively, take most of the acting plaudits, providing a gripping display of physical guts and emotional depth in the early stages of the film.

The tsunami itself is astonishingly well staged as the power of the water destroying everything in its path achieved the roller coaster effect of pushing me back into my seat.

In most cases, I say the less informed you are about a film before you see it, the better the experience tends to be. If you know nothing about the real life events that The Impossible bases itself upon, then there’s every chance you’ll be absorbed and emotionally drained by the end. The direction and locations are flawless and the performances match up. The film rightly found criticism for changing the ethnicity of the family, but with the cast giving such endearing performances, it’s easy to paper over those cracks as the power of the story takes centre stage. 4/5