Posted on September 18, 2014 by garethrhodes 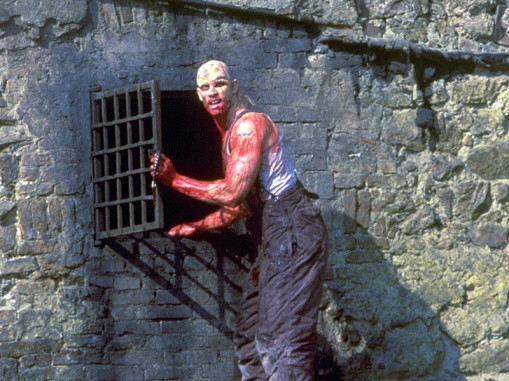 I’ve had more exhilarating adrenalin bursts from a trip to the tax office, than I had watching Albert Pyun’s Adrenalin: Fear the Rush. With most films, I can draw on at least one positive element to balance even the most negative of reviews, but with this, I’m struggling.

Natasha Hentridge and Christopher Lambert star in what I can only call a horror/action thriller, which, for the most part, focuses on their characters as part of a team of police officers on the hunt for a cannibalistic murderer, infected with a disease that could pose a threat to the future of mankind. Damn, I’m making this rubbish sound half decent.

For starters, most of the film is shrouded in darkness. Granted, it takes place in disused, underground tunnels, but that’s a poor excuse for not showing us what’s going on. Secondly, the script lazily opts for a barrage of cheap bad language to substitute any kind of thoughtful character development or interaction. Henstridge and Lambert serve to be little more than names on a poster, as both of their roles seem never anything other than trimmings around irritatingly noisy gunfire.

Considering it was backed by Miramax and Dimension Films, I can honestly say, this is one of the worst films I have ever seen. The only emotions I felt were boredom and regret. Whatever you do, don’t make the same mistake I did. Avoid like the plague. 1/5