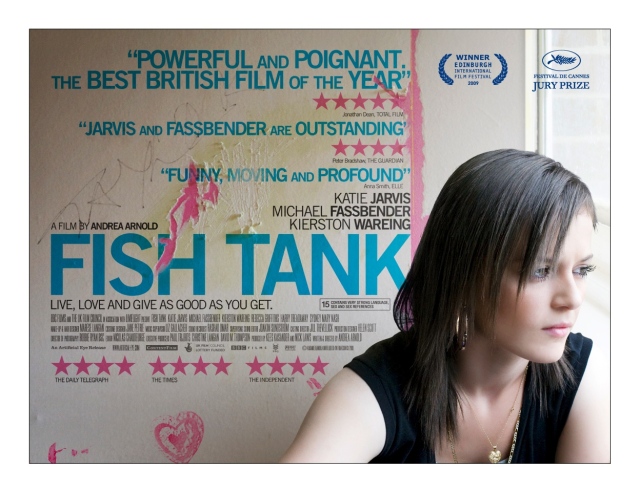 Winner of the Jury Prize at the 2009 Cannes Film Festival, as well as a 2010 BAFTA for best British film, the reality of writer/director Andrea Arnold’s kitchen-sink drama, Fish Tank, is that it exists a million miles away from the red carpet glamour of the film industry elite.

The film centres on a 15 year-old girl, Mia, as played by first time actress, Katie Jarvis. Mia lives with her neglectful mother (Kierston Wareing) and younger sister. Life is grim for Mia. Her mother is a bitter, selfish mess and seemingly apathetic towards the needs of her young daughters. Their world changes when mum begins a relationship with Michael Fassbender’s Connor, a curiously decent man who brings kindness and relief into Mia’s otherwise chaotic surroundings. And so begins the tale.

The first thing to say is that Katie Jarvis is excellent in the lead role. Reportedly, she was chosen for the part after a casting assistant overheard her arguing with her boyfriend in public. As Mia, her performance feels so natural and real, that it completely takes you away from the feeling of watching acting. A fine achievement. Indeed, this is a film of well judged performances. Michael Fassbender likewise, is a captivating screen presence, and as his uneasy relationship with Mia develops, it provokes a whole range of emotions.

This is a beautifully raw and emotionally complex film. Mia’s vulnerability, and need for love is often heartbreaking and as events unravel, levels of discomfort reach almost unbearable proportions. Andrea Arnold’s film fully deserves all of its plaudits, for its unflinching and strikingly intimate depictions of some of lifes harsher realities. 4.5/5