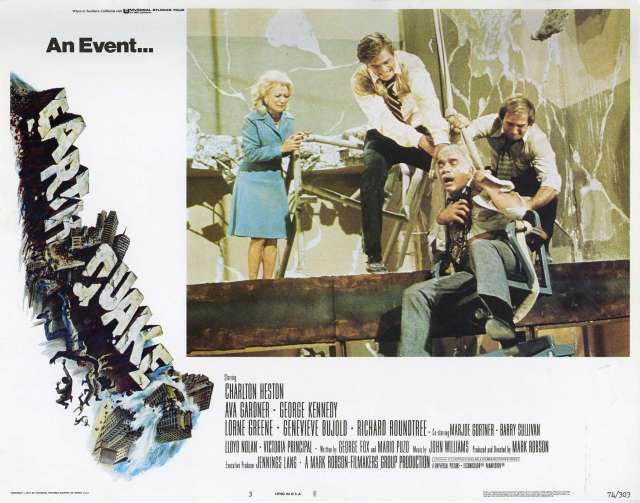 In the early to mid 1970’s, Hollywood enjoyed a love affair with the disaster movie. Thanks to the big success of The Poseiden Adventure and The Towering Inferno, it was a trend that was to continue throughout the decade, spawning the odd guilty pleasure along the way. It’s a shame then, that 1974’s star studded Earthquake has all of the guilt, and scant little of the pleasure.

With an ensemble cast featuring Charlton Heston, Ava Gardner, George Kennedy, Lorne Greene and Genevieve Bujold – the script has a wastefully one dimensional, TV movie-of-the-week tone that renders each character little more than token. The film isn’t satisfied with squandering its A-list cast, as it features a whole host of dead-end characters in roles that serve little-to-no purpose. Indeed, of all the supporting players, Walter Matthau’s semi-conscious, bar-room drunkard seems to have the best idea.

When the main event of the earthquake finally hits, it’s a welcome relief and considering the era, is reasonably well done. As the camera violently shakes, we witness buildings crumble as a lorry veers off a motorway bridge – it seems we’re getting what we banked to see. A half-baked attempt to depict the chaos of civil breakdown in the wake of the ‘quake, come off as clumsy and tacked-on. In the aftermath, there’s an attempt to put in some suspenseful, Poseiden-esque rescue sections but the film pays heavily for not investing more in its characters in the early stages.

Sadly, Earthquake survives as a footnote of a 70’s disaster film. Its attractive cast have far too little to do due to a poor script and a line-up of expendable supporting players. The special effects carry some weight for the time but there’s little here to properly shake your world. 2/5