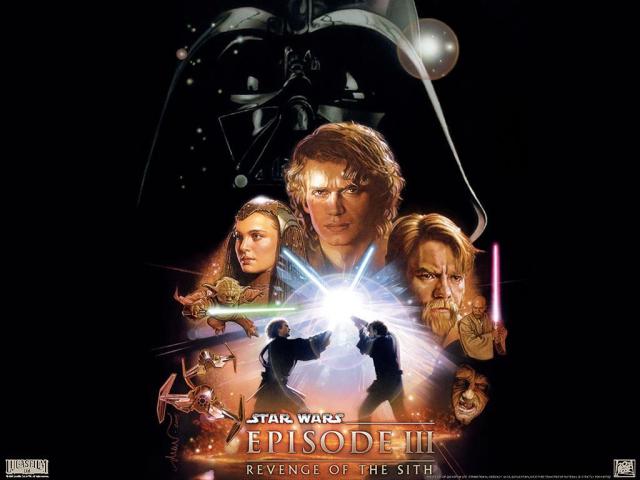 The movie gets off to a literal flying start as we reaquaint ourselves with Obi-Wan and Anakin in the midst of an almighty space war. It turns out to be a fun rescue mission with an early dramatic turn. Ewan McGregor and Hayden Christensen find some buddy banter, evidently more relaxed in their respective Jedi cloaks as a little confidence seeps through.

The story then picks up the strands of where Attack of the Clones ended with Anakin and Padme’s clandestine love hidden in the shadows. Lucas’ inability to write women is confirmed as Natalie Portman’s Padme is nudged out of the frame as she grows a baby bump. Once again Lucas begins to serve up an uneven film that occasionally highlights his talent and frequently questions where it went.

Gone is Jar Jar Binks. Gone are the moments of slapstick. Even C-3P0 is toned down as an earnest narrative through-line of death and rebirth begins to take centre stage.

It is a joy to watch Ian McDiarmid hamming it up again as the most evil man in the galaxy. I get the feeling McDiarmid had more licence with Lucas to improvise takes and ‘do his thing’ as he rolls back the years to recall his delightfully cackling wickedness of Return of the Jedi.

One scene at a space opera belongs in a 5-star film as everything slows to take a moment to soak in some fascinating character development. McDiarmid takes us away from the effects, the battles, the noise to demonstrate how enriching good acting and storytelling can be. I do not want to leave this scene. For the first time in this prequel trilogy, I crave more.

Ewan McGregor gives his best performance of the trilogy. To say he is no longer operating in the shadow of Alec Guinness is the highest form of praise I can give him. He’s doesn’t transcend Guinness, it’s more that he carves some his own identity into the character.

The film dips back to the cartoon tone of the previous outings as McGregor’s Obi-Wan mounts a giant lizard which emits an annoying squeal as he pursues the film’s sub-antagonist, General Grevious around a busy digital landscape.

An inevitable twist of evil is shoehorned in. It is a moment that has to happen but when it comes feels more that it had to happen than would happen, based on what we’ve seen.

There is a dual-climax lightsaber battle involving four iconic characters. Both set-pieces are overblown in their execution. Palpatine force-throwing giant bits of the galactic senate at CGI Yoda looks even worse than it sounds. It doesn’t feel like these two characters should ever have met, nevermind get involved in a test-of-stregth fight scene that serves only to undermine them both.

The inevitable Anakin/Obi-Wan final stand mirrors the overall descent-to-hell intentions as they cross swords on lakes of fire, often jumping around like sprites in a Super Mario video game. Frankly, it looks absurd. The drama of these two men and the history they share should be enough but Lucas cannot help himself. His digital environments are equally important to him but they impose on the drama and rob it of resonance.

When the very final moments come Lucas attempts to throw the kitchen sink of original trilogy nostalgia at us. For a brief moment through John Williams and his magnificent orchestra I feel something…but it is too late. The overall feeling as this prequel trilogy closes is that the Star Wars I grew up loving deserved better.