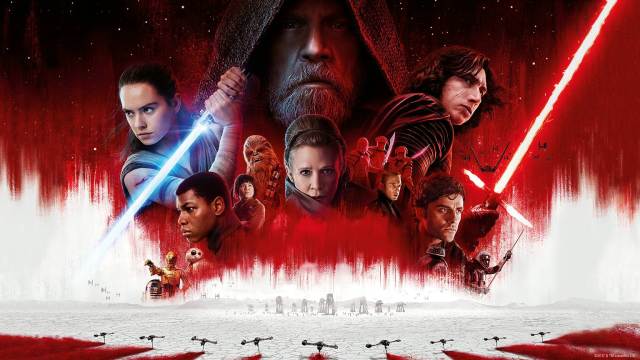 Lucasfilm never envisaged their sequel to The Force Awakens would become the most divisive film in recent memory, but then in Rian Johnson, they hired a smart and progressive film-maker whose highest profile release to date had been the respected sci-fi thriller, Looper. Together with his long-time producer and collaborator, Ram Bergman, Johnson cultivates what is the most enterprising addition to Star Wars canon since The Empire Strikes Back.

After the goose-pimples of “A long time ago in a galaxy far, far away” and the never-ending elation of John Williams, the film begins with space combat reminiscent of a World War II thriller, with Resistance bombers taking on a First Oder dreadnought (not a Death Star in sight). There’s bright early humour to re-establish Oscar Isaacs’s Poe Dameron as he toys with an increasingly hapless General Hux (Domnhall Gleeson), whose sniveling character is firmly set in that mold by Johnson.

It doesn’t take long to sense a shift in tone from where J.J Abrams left us, as we finally get to see how that literal cliffhanger of an ending plays out. This is exactly the moment where Rian Johnson affirms that Luke Skywalker line in the trailer – “This is not going to go the way you think.” From thereon in, this isn’t the ‘Star Wars’ you grew up loving, but it’s the ‘Star Wars’ it needs to be. Think of it as your parents making you eat your greens. You didn’t agree with them at the time, but one day you’ll know they were right. If parts of The Empire Strikes Back were about growing up and making life-altering choices, The Last Jedi is about not knowing how to grow up and accepting failure. If you stop and think about that for a second, it’s a bold hand to play in a series as widely ingrained into the everyday consciousness as Star Wars, and despite the voices of discontent across the internet, it feels right.

For many fans, seeing Mark Hamill back as Luke Skywalker was always going to be emotional, but Johnson only allows his audience a fleeting glance of the Luke they know. Instead, we meet a 30-odd-years later Jedi, disillusioned and in self-imposed exile on Ahch-To – also home to Porgs, the most loveable creatures since a baby Ewok. Despite Hamill’s well-known misgivings about the direction of his character, he summons a gutsy performance as he resists Rey’s desperate pleas for him to join the fight.

Dark and grey as the writing is, the film still carries that beacon of naive humour that people sometimes forget is a central theme of George Lucas’s beloved original trilogy. For a saga that has always been so clear-cut in its distinctions between good and evil, there’s also a surprising subtext about the scepticism of war. A distinguished Benicio Del Toro spouts to John Boyega’s Finn – “It’s all a machine, partner. Live free, don’t join“. Its moments like this that Star Wars is playing for the grown-ups, but then, seconds later we see silliness as the ball droid BB-8 operates the laser cannons of an AT-ST (the chicken walker things from Return of the Jedi). We might groan a little, but then Star Wars has always been a series that aims to play to young and old.

As the conflicted Kylo Ren, Adam Driver provides another performance of moral complexity and depth. In terms of villains, it’d be easy for Star Wars to rest on its laurels, yet the events in Johnson’s script seem to mock convention, bypassing the internet theories with character arcs that are often surprising. Kylo Ren is a villain for our times;  undermined, abandoned, misunderstood, confused and bursting with rage.

There is a ‘space casino’ middle-section that plays as a droopy detour away from what we’re interested in. The section is headed up by John Boyega’s Finn and newcomer Kelly Marie Tran as Rose and feels like an unusual return to the feel of the ‘prequels’. It’s ineffectiveness makes Finn much less a character than he was in The Force Awakens, while Rose is an affectionate attempt to make a character who is representative of us all, but despite one beautiful line, that doesn’t quite work either.

Then there’s our Princess, Carrie Fisher. The film was never supposed to be our goodbye to her, but sadly, it’s imbued with a sense of poignancy that was never supposed to be there. On top of everything else that happens, the contribution of this inherent sorrow is perhaps a reason why so many left the theatre feeling flattened. Fisher is Leia one last time and Johnson gives her much more to do than J.J did. When Luke kisses her head after saying “No one’s ever really gone”, don’t be surprised to find a lump in your throat.

The voices of discontent have been loud and clear, but the narrative of burying the past and forming a new future away from the established norms is not only a development in the plot, it’s Rian Johnson’s philosophy for the future of Star Wars. I’m with him all the way.