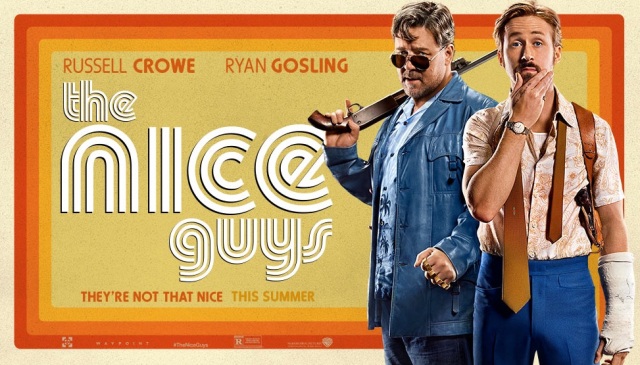 Directed and co-penned by Predator actor, Lethal Weapon writer and Iron Man 3 helmer, Shane Black, The Nice Guys is a slapstick action-comedy-cum-buddy-movie awash with some gloriously tacky nostalgia, blended with a 1970’s neo-noir thriller. Los Angeles. Russell Crowe is Jackson Healy, a tough-guy enforcer hired to beat on blokes for pestering/having innaproriate dialliances with young girls. One smoggy day, his path crosses with impecunious private eye, Holland March (Gosling), which begins one of the most organically funny screen pairings in recent years.

From start to finish, Crowe and Gosling are an absolute blast, tearing into each other and themsleves with aplomb as they relish sharing the screen. Gosling plays as disaster of guy; irresponsible father, con-man and bordeline alcoholic – struggling to make ends meet for his neglected daughter. Amid these character failings, he appears the most ill-prepared man to complete the job, yet it is his hapless nature that fuels much of the knockabout comedy and interplay.

There’s a The Waltons gag tied to a pivotal character which is indicative of the film’s aim to straddle demographic appeal. The fashions, music, scenery and interiors all combine to create a thick sense of character – a visual feast the like of which you might expect of Quentin Tarantino. Between the groovy sounds of Kool & the Gang and The Bee Gees, a goateed Gosling is rarely seen without a cigarette, alongside the short-tempered Crowe, looking heavyset and garbed in an oversized leather coat. In no small way, as we pass a roadside billboard advertising Jaws 2, it’s more 1970’s than the 1970’s.

While The Nice Guys might be too frivolous for some, going along with its carefree nature is key to understanding, and, more importantly, enjoying its overlying attributes. It sows a few sequel seeds towards the end, which, on the evidence of Crowe, Gosling and Shane Black’s deft grasp of the material, would be very welcome indeed…“and stuff”. 4/5