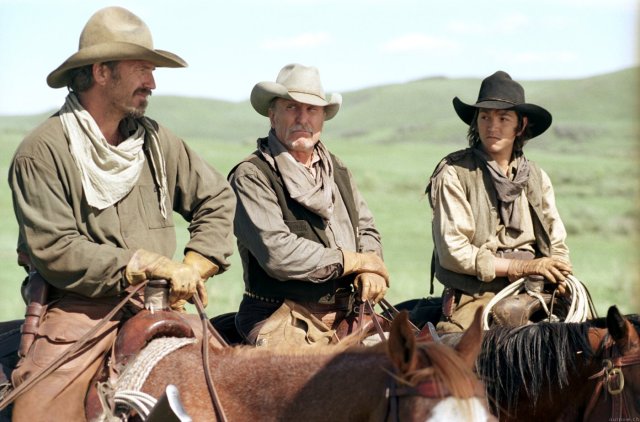 The third, and to date last directorial offering from actor-director Kevin Costner, Open Range, is a revenge-cum-romantic drama set in the Old West, about a small group of ‘free grazing’ cattle drivers working across the vast untouched prairies of America.

Costner plays Charley Waite, a man haunted by a violent past, seeking a quiet life when he and his team of ranchers are set upon by band of spiteful lawmen. Together with his longtime partner (Duvall) they set about exacting revenge. On the way, he encounters a woman (Bening) who symbolises an offer of hope against his self-perpetuating turmoil.

Kevin Costner emits chivalry, playing the inner conflict of an inherently noble man fighting off the demons of his own unrighteous path. Teamed with the wise, fatherly figure of Robert Duvall, there’s something immediately heart-warming about their friendship. Indeed, with Diego Luna and Abraham Benrubi playing understudies to Costner and Duvall, there’s an unspoken family bond between the four men, living thier lives off the land in the great open plains of Gods green (and very rainswept) America.

From a pure cinematography standpoint, the film is breathtaking to behold, more so when romanticsed by Michael Kamen’s graceful orchestral score. We already know Annette Bening as a smart, gifted actress, and here she is beautiful, warm and disarming, often with only the most subtle of gestures.

Added to the romance and sense of adventure the images instil, there are explosive gun battles mounted on a solid foundation of suspense and tension. Yes, it’s about redemption and reckoning and there are saloons and standoffs, yet it never feels like a slave to the staples and traditions of the western. Kevin Costner’s largely forgotten talents as actor and director shine brightly alongside the enlightened presence of Duvall, on the way to producing one of the most straight-up satisfying westerns in recent memory. 4.5/5