Posted on September 17, 2016 by garethrhodes 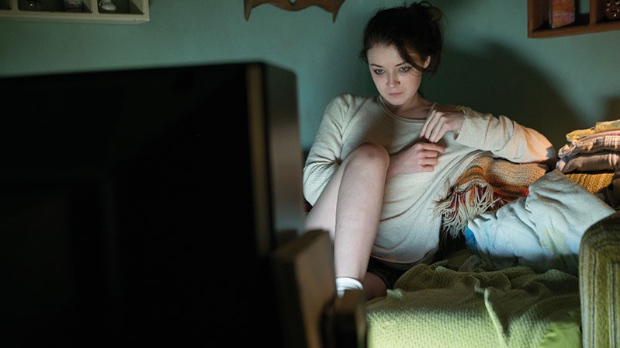 As a man with no children, sat in my living room feeling tense and uncomfortable in the company of Michael Thelin’s taught horror-thriller, Emelie, I wondered how I might feel if I was a father of three, out for the night with his wife seeing the same film at cinema, knowing the kids were home being ‘looked after’ by the babysitter. I suppose it’d be a bit like watching Die Hard 2 on an aeroplane…only about twenty-times worse. Listen up parents, if you found Rebecca De Mornay hard to swallow in The Hand that Rocks the Cradle, trust me, you don’t need introducing to Sarah Bolger as Emelie.

David Fincher has previously discussed “films that scar” – films like Jaws and Psycho. Well David, add Emelie to your list. The film opens in disturbing fashion, setting a threatening tone that intensifies as events quickly take course. It’s the sort of film you watch, seemingly aware of what awaits, yet still,  it catches you unprepared for the onslaught of upsetting moments.

Tonally, it’s shot with a gloomy, under-lit aesthetic that brings home a depressing reinforcement of the darkness that lives in the centre of its warped heart. Structurally, it offers little new to a genre that has trod similar turf in slightly different shoes, and while Sarah Bolger’s Emelie will never attain the iconic status of Glenn Close’s famous bunny boiler, in terms of overall nastiness, she surpasses her with ease.

In summary, away from blood, guts and ghouls, Emelie is a film that offers genuine horrors. So much so, that it’s sometimes hard to tell if you’re actually enjoying yourself. To say ‘it isn’t for everyone’ might be an understatement. Oh, and hamster lovers pay attention…never watch this film. Ever. Just don’t. Ok!? 3.5/5