Posted on January 9, 2016 by garethrhodes 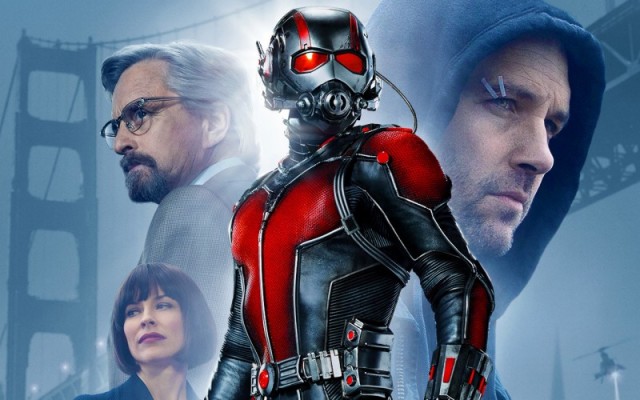 The smooth operation of the Marvel Cinematic Universe hit a bump in the road when co-writer, Edgar Wright, vacated the directors chair citing that old chestnut, “creative differences” and was swiftly replaced by Peyton Reed on Ant-Man, a quirky new branch of the Marvel series, in which a cat burglar is given a chance at redemption, when his skills capture the attention of Dr. Hank Pym (Michael Douglas). Fortunately for all involved, a bump is all it was.

Ant-Man continues the MCU theme of making a concerted effort to subvert its own ‘big’ dramatic scenes, which usually comes in the form of a quip, tagged on the end of some kind of emotional speech. Mostly known as a comedic actor, Paul Rudd is a perfect fit for this kind of delivery, as he takes the lead role of Scott Lang.

Interestingly, although we met Rudd’s character in an awful predicament (he’s being released from prison and has an awkward relationship with his ex-wife and daughter), the tone from the outset is bright and comedic. It’s made clear to us that he isn’t a bad guy – just someone who’s made poor choices, which is an ideal jumping off point for the hero’s journey to begin.

While it isn’t home to any big reveals, twists or surprises, the action and comedy are both inventive and at times, surprising, in and of themselves. With some outlandish visual gags, as well as savvy interplay between the actors, the film succeeds in sweetening the chore of having to endure yet another origins story.

The real ace in the pack, here though, is seeing the mundane world from a tiny perspective. In this sense, the film harnesses the comedic appeal of Land of the Giants meets Honey, I Shrunk The Kids, while never overplaying the hand. It leaves a sense of wanting more (I sat there dreading him stumbling across a random house spider), which is something the numerous Marvel films have been very careful to achieve.

While it might feel significantly more aside than many of the big Marvel productions, with some boundary pushing silliness with a few of the supporting characters (Michael Peña and co), there’s a good sense of personality woven into a film that refuses to take itself too seriously. 3.5/5