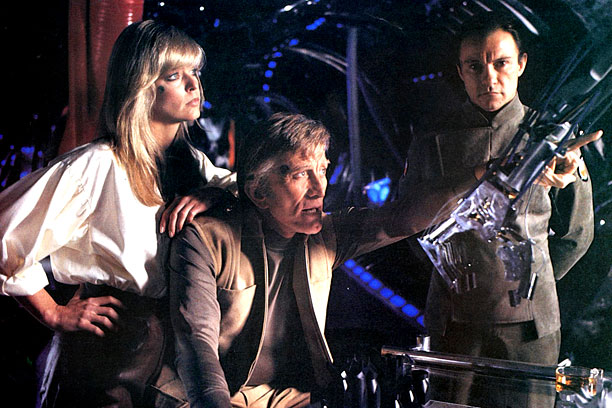 Oh, the curse of the troubled shoot. Some films survive the turmoil and turn out much better than they ought to have been, considering the on-location upheaval. Look at Apocalypse Now or Superman II – both of those films were famously stricken with conflict (the latter even changing director halfway through), but they both went on to become classics in their own right. Then there’s those that fall by the wayside, like Stanley Donen’s (or is it John Barry’s!?) Saturn 3.

Considering it’s such a simple idea (story by Barry), the film ought to work a lot better than it does. A couple (Kirk Douglas and Farrah Fawcett), who are experts in hydroponics are stationed on an isolated moon base when they are visited by Harvey Kietel, who proceeds to build an 8-foot AI robot called Hector…which suffice it to say, doesn’t go exactly according to plan.

Firstly, the editing is way off. Donen’s film is too hasty to cut to the chase, sacrificing any chance of getting to know the characters which leads to a vacuum of dramatic tension. The pairing of Kirk Douglas and Farrah Fawcett wouldn’t be so unusual, if we were invited to get to know them, but such is the impatience of the edit that we’re given mere scraps of who they are. It’s a crying shame too, because the design of the film is a genuinely impressive sight – ripe for creating an involving sense of atmosphere.

Well in to his 60’s, Kirk Douglas’s character is like a man who has won the life lottery. He spends his days making love to a lithe Farrah Fawcett (easily half his age) to stave off the boredom. In fairness, the film does briefly address the inevitable paranoia of big age-differences in relationships, but falls short of making much else count, as sexual rivalry becomes a main factor for the motivations of the male characters.

There are a lot of unexplored ideas waiting in the wings of Saturn 3, ones that could have been included if it would have taken its time. The production design of the moon base is extraordinary, for a film as widely disregarded as this is. It’s disappointing to say it, but with its stretches of eye-catching corridors and 70’s-chic living quarters, the background is the star of the film. Ultimately, it makes watching it an extremely frustrating experience, as you pine for more meat on the bones, in terms of character and plot. 2.5/5