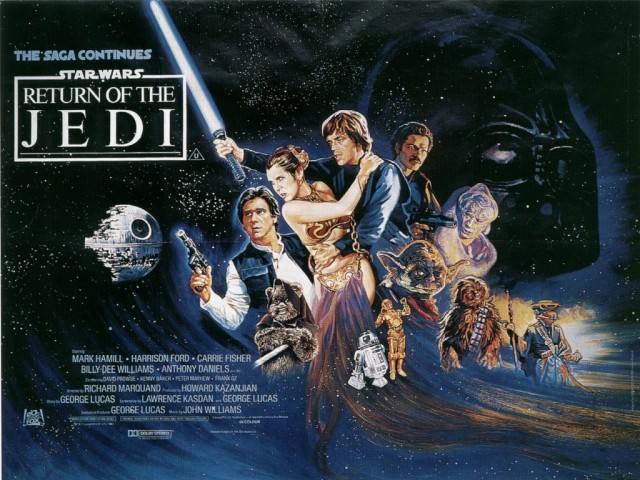 Working from a screenplay by Lawrence Kasdan and George Lucas, Welshman Richard Marquand takes the director’s chair for this climatic instalment in George Lucas’ Star Wars series. Last we knew, Luke Skywalker was having serious daddy issues, while Han Solo had been turned into a frozen coffee table. All was not well in the galaxy far, far away.

Let’s not beat around the Bantha here – no, it isn’t as good as The Empire Strikes Back, but then again, how many blockbusters are!? What Return of the Jedi is, is vastly superior, space-fantasy entertainment that happens to be an audaciously thrilling finale to two of the greatest and most popular films ever made. People often forget to mention that when they dismissively say – “it isn’t as good as Empire”.

After the dark intensity of ‘Empire’, we take a tonal jump back to the light. After briefly catching up with Darth Vader, we’re back on Tatooine, the spiritual home of the series, as C3-P0 and R2-D2 travel to Jabba The Hutt’s palace with an important message. This long sequence harks back to the fun of the original movie, almost like an extended ‘Cantina‘ sequence in which we’re introduced to all manner of aliens, congregated around Jabba – a grotesque giant slug with a taste for swallowing live frogs. That, and feeding scantily-clad dancing girls to his pet monster in the cellar, for kicks. Did I say this was a step back to the light!?

The story imperative of ‘Jedi‘ is to complete the journey of the hero. This is, above all, the story of Luke Skywalker and Darth Vader. Sadly, that means that, dramatically, Princess Leia and Han Solo (so vital in the previous two films) are given little new of their own to contribute. For the first hour, Carrie Fisher barely speaks as she’s ‘dressed’ in that gold bikini and told to shut up by the script. Harrison Ford too, seems somewhat absent as his character is thrown into the fight against the Empire while Luke goes after Vader.

This is where we come to the nuts and bolts of the entire saga. Luke vs Vader was one thing, but now we have Ian McDiarmid’s Emperor Palpatine to contend with. McDiarmid comes close to stealing the show, playing the deliciously nasty Sith master with absolute relish – rarely has evil been such a delight. The first time we see it, the peril Luke finds himself in is genuinely felt by the audience, especially after the scars Empire left us with.

I can’t review ‘Jedi’ without bringing up those pesky Ewoks. Whether their role in the film was inspired by the Vietnam war, or a need to sell cute merchandise – they tend to leave a grubby stain on the original trilogy, in the eyes of many people. Personally, I’m so wrapped up in the story by this point, that their presence isn’t anywhere near as problematic as some observers pretend.

After all the mind-blowing space battles, white-knuckle speeder-bike chases through the thick forests of Endor and the John Williams-led stirring final confrontation between father and son, it’s hard to deny the sheer entertainment value of Return of the Jedi. Yes, the Ewoks are a silly diversion but that’s all they really are. A fitting final chapter then to the greatest space saga. 4.5/5