Posted on November 9, 2015 by garethrhodes 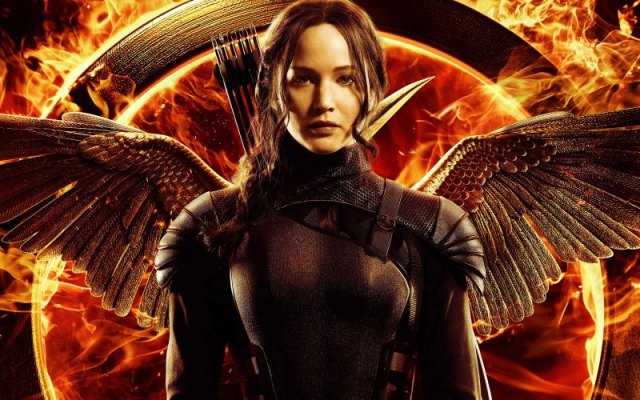 As has become the tradition with film franchises that generate aircraft carriers full of cold hard cash, Suzanne Collins’ Hunger Games trilogy is fleshed out to four films, splitting the final instalment, Mockingjay, into two parts.  To help broaden the canvas, Catching Fire director, Francis Lawrence, is joined by a new writing team of Peter Craig and Danny Strong, during which the story of the Katniss revolution goes underground to plan its final move against ‘the capital‘ and President Donald Sutherland.

One thing this series has always had in its ranks, is the finest acting talent, so adding Julianne Moore alongside Jennifer Lawrence, Philip Seymour Hoffman and Stanley Tucci serves to extend the acting credentials far above the level of your average workaday blockbuster. It’s a shame then, that portions of these films have a distinctly workaday feel to them. Indeed, much of what happens in Mockingjay –  Part One feels too much like a set-up for an almighty climax. Big chunks of it feel like the first hour of The Martrix Reloaded, (the bit in Zion where nothing happens) but with better dialogue and better acting and okay…better everything.  There’s no doubt the next film will be better (they probably said that for The Matrix Revolutions) but you sense it could have all been contained within one film. Of course, the box office demands otherwise.

Through all the smoke plumes, concrete rubble and mildly annoying bits of exposition, Jennifer Lawrence is never anything less than excellent. There’s a real humility to her portrayal of Katniss Everdeen, demonstrating that genuine power comes from within. The character is never exploited or sexualised, representing a beacon of light for high-profile, young female roles. It’s as if all of a sudden, you don’t need to sacrifice character in favour of being pretty to gain validation in the mainstream. More of this please, Hollywood.

Given the uprisings across the real world, most prominently reported throughout the middle east and Ukraine, the overarching narrative of The Hunger Games resonates beyond the realms of sheer entertainment. On this level, there is a disquieting truth to the story –  a world in which propaganda and media are the most effective weapons to deceive, suppress or ignite the masses. 3/5