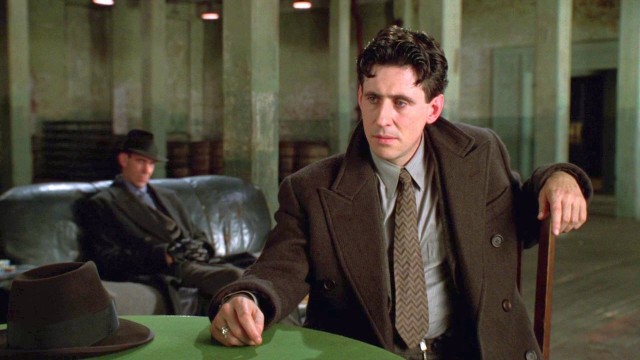 Set in the 1920’s during the era of prohibition, Miller’s Crossing is a noir gangster thriller written by the Coen Brothers starring Gabriel Byrne as Tom Reegan, a smarter-than-your-average hoodlum, playing right-hand man to Albert Finney’s Irish mob boss.

With the Coen’s, there’s an inherent breath of comedy running through most of their work – even the darker pieces in their catalogue. By turns, the humour in Miller’s Crossing can be seen as irreverent, as the Coen’s appear in the mood to have a little fun with the formula of the gangster epic. All the ingredients are there; the period detail complete with fancy cars and ‘Tommy Guns’, the sassy-mouthed broad (Marcia Gay Harden) and witty repartee. There’s the obligatory talk of loyalty, ethics and code but it’s all done with the Coen’s individual stamp, marking it aside from the standard fare of the genre. Through their razor sharp and highly quotable dialogue, the Coen’s create a rich sense of character which to an actor, must read like kid-in-a-candy-store stuff.

The performances are all excellent. Gabriel Byrne leads the line brilliantly. We sense his character is a little fed-up with his world and the fools he finds himself surrounded by. It’s almost as if he’s seen all the gangster films and knows all of the stereotypes. Many of the characters circling his world are the typical power-hungry clowns –  the architects of their own downfall. It’s never more evident than the first character we meet, Jon Polito’s Johnny Capser, a comedy-gangster in the mould of Danny DeVito, albeit a nastier version.

During any of the Coen’s offerings, there’s always the strong sense that your’e watching a film by great artists who love and understand the power of great cinema. In Miller’s Crossing they have yet another classic film that purposefully doesn’t quite fit the genre it ‘belongs’ to. And that’s part of what makes them great. 5/5