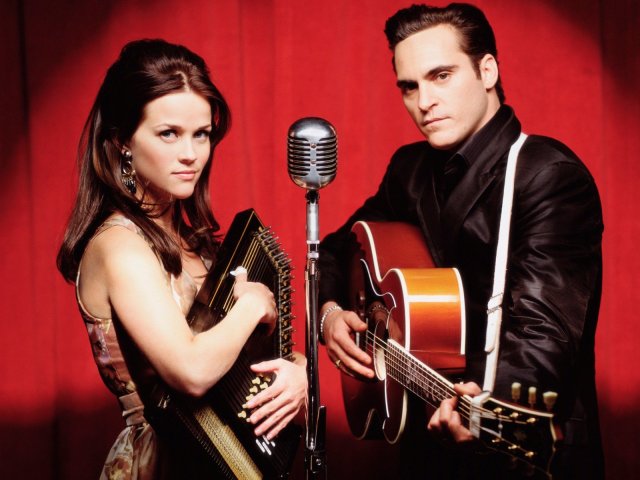 Co-written and directed by James Mangold and based on the autobiography of Johnny Cash, Walk the Line covers periods of the musicians life from his days growing up on a farm in the 1940’s, his tempestuous relationship with June Carter, to his ‘The Man in Black‘ phase, which featured his famous recordings at Folsom Prison.

The simmering intensity between Johnny and June is played out brilliantly by Joaquin Phoenix and an Oscar-winning Reese Witherspoon – both actors admirably committing themselves to roles wide-open to scrutiny.

Phoenix’s Cash is a man with his heart on his sleeve – a no-frills ‘guitar-picking-man’ with a guilty conscience. Some of that guilt stems from childhood, and the divide between himself and his belligerent father (Robert Patrick) over the tragic death of his older brother, Jack. The rest of the guilt is over his struggle to maintain balance between ordinary family life and the immense pull of success in the music business. It’s curious to observe, but there’s an introverted expressiveness about Phoenix’s Cash – almost as if the actor is channelling two warring personalities at the same time.

The real litmus test comes in capturing the essence of the music, and neither Phoenix or Witherspoon disappoint; the contrary, they excel. Witherspoon positively takes off during her show-stopping performance of Jukebox Blues, oozing with charisma and giving the impression of a woman completely at home on stage. Oddly, although the songs are pre-recorded, there remains a feeling of spontaneity as the on-stage chemistry between the pair is brought to life.

Aside from the music and performances, there are spells when the films tends to marginally drift. It’s hard to pinpoint exactly, but there are times when it seems to lack cohesive structure. Whatever the reason – the 136mins does feel a little heavy.

Essentially, Walk the Line is a story of love and reconciliation with some great music along the way. As seems the case with any rock n’roll story, there’s the obligatory tantrums and battle with substance abuse – but in the end, Cash never became a victim of his success. He was just a supreme talent fuelled by the companionship of the woman he dearly loved. 4/5