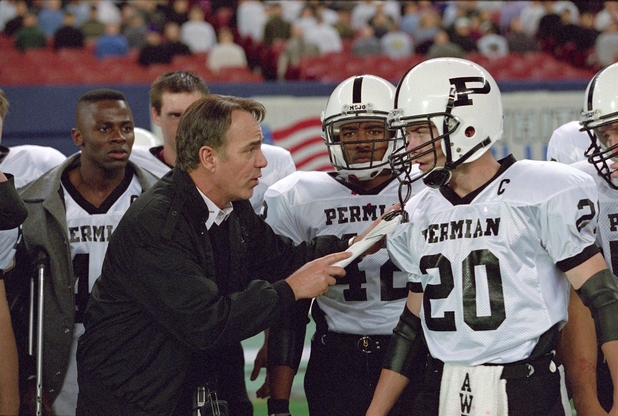 Based on a book by Buzz Bissinger entitled Friday Night Lights: A Town, a Team, and a Dream, and directed and co-adapted for the screen by Peter Berg, Friday Night Lights tells the true story of a college football team -The Permian High Panthers – and their bid to challenge for the Texas State championship in the late 1980’s.

What I like about Friday Night Lights, is that you could strip away the college football and apply it to more or less any team sport. Indeed, it’s hard to think of any sports film that covers so much ground around the collective effort involved with striving for success. With that, and like all the best sport-related films, you need very little knowledge about the game to feel involved.

Billy Bob Thornton is excellent as Coach Gary Gaines, the manager of the Panthers who shoulders the weight of expectation placed upon him the people of Odessa, Texas – a troubled backwater town crying-out for a little joy. Like so many struggling, working-class societies – sport plays a pivotal role in the overall morale of its people. Through incidental photography and sparse electric guitar, Berg manages to paint a picture of a melancholic town, mis-sold the American Dream.

The inner-dynamics of the team dressing room are beautifully played by a young and talented ensemble cast. The playful banter, the pre-game adrenalin, the blow of injury and the rousing team-talks – its all there. Not only that, the film deals with the pushy parents, desperate to see their kid succeed where they fell short. This creates interesting subtexts of individual drama relating to the core drama on offer.

The competitive action of the games are suitably bone-crunching in their portrayal. Between the clash of helmets and the brute force of a full body tackle – bloodied noses and broken fingers are standard.

With an array of fine performances headed up by the never-less-than-brilliant Thornton, Friday Night Lights is a gem of a sports film, imbued with genuine heart and the significance of commitment to the cause above winning. Touchdown. 4.5/5