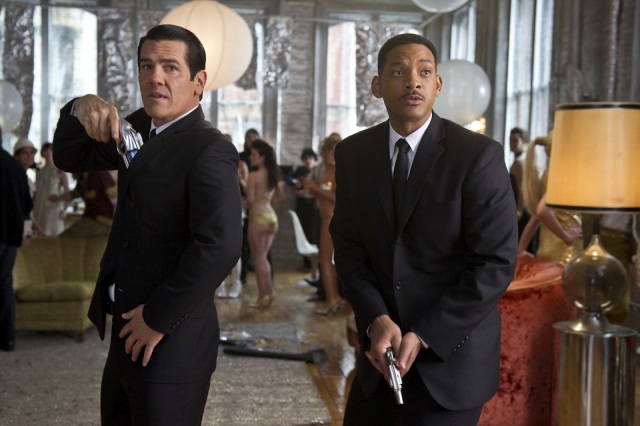 After the frankly abysmal Men in Black II, you might be forgiven for having reservations about another dip into the comic-book inspired world of underground alien surveillance that is, the MIB franchise. The good news is, normal(ish) service is resumed. It’s hard to believe, but fifteen years have passed since Will Smith and Tommy Lee Jones first donned the suit and tie combo to “protect the Earth from the scum of the universe”. In that time, comic-book inspired films have taken over our multiplexes and amid the rush, MIB has become a trifle passé. Even Will Smith’s star doesn’t shine as brightly as it used to.

Firstly, and perhaps most importantly, the film aims to have fun by embracing the daftness. Colourful and lively, it is further lifted by Smith’s willingness to play along with the materiel, however ridiculous it might be. The central thrust of the plot involves time-travel – Smith’s character travelling back to meet a younger version of Tommy Lee Jones’ character, played by Josh Brolin. Try to keep up.

Amid the madcap fun, Josh Brolin does a remarkable job of playing a younger Tommy Lee Jones. With small mannerisms and deft touches, Brolin’s turn is more impressive than any and all of the film’s countless special effects. On the subject of the effects, director Sonnenfeld ensures a tighter lid is kept on overusing gimmicks (i.e cute talking animals/aliens) this time around. The effects are fun and entertaining, but he understands that they are best employed as set-dressing and background detail. This is where there is fun between the gaps in Men in Black 3 – sometimes, it’s enjoyable to sit back and admire the weird collection of alien beings dotted around each scene.

While it feels like step-up from ‘II‘, it does little to make itself stand alone as particularly good film. A small appearance from pop-star Nicole Scherzinger leaves us wanting more, and the actors are mostly likeable; Jemaine Clement plays a suitably over-the-top baddie, while Emma Thompson is a welcome addition to any cast. In the end, though, too much from the previous films is recycled to make it feel like a fresh adventure. Indeed, with so much time between sequels, you might be surprised how disinterested it is from veering away from the same old formula. Passable, harmless fun at best.  3/5