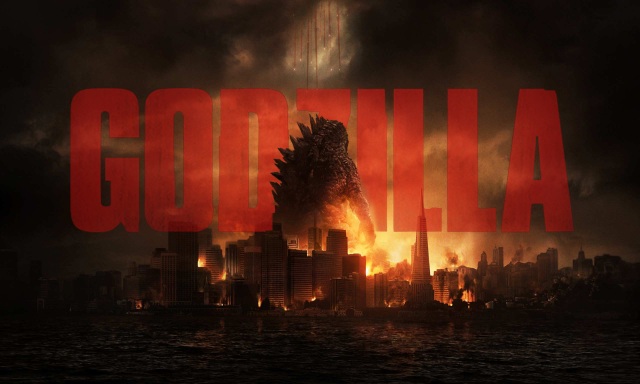 When it comes films about giant monsters laying waste to modern cities, I’m usually onside for joining in with the fun. Godzilla is widely viewed as the daddy of all behemoths; perhaps one of the most recognisable symbols of Japanese pop culture worldwide (just don’t mention Godzuki). So successful has the character been – that he has popped up in countless films since 1954, and is currently recognised as the longest running franchise by Guinness World Records. Director, Gareth Edwards continues that healthy streak with this souped-up, $160m version of the legend.

Beginning in Japan; with a story by Dave Callaham (whose CV most notably boasts The Expendables and Doom), and a screenplay by Max Borenstein – the film struggles to make an emotional impression. The set-up is simple, and ultimately involves big creatures fighting each while everything is destroyed fifteen times over. Early on, we’re introduced to a pair of characters played by Bryan Cranston and Juliette Binoche (if only the film could have been about them), and although it can’t escape the generic feel that so many workaday blockbusters innately have – there is some moving symmetry with the Japanese tsunami and subsequent nuclear fallout that devastated areas of the country in 2011.

Soon after, the early promise fades as the story centres on Aaron Taylor-Johnson (Cranston’s son in the film), who gives a vacant central performance – that in all fairness, is the mostly the result of a flat script. It’s one those films that squanders the talents of good actors like Elizabeth Olsen and David Strathairn in small, unremarkable roles.

Setting the scene in Japan affords some pop culture authenticity, but the balance of human investment becomes less and less as the main draw of monsters fighting each other takes centre stage. Gareth Edwards’ previous film, Monsters, was effective for being a film about human beings with monsters as a backdrop. Some of that is attempted again here, but the human characters (Cranston aside) don’t pop enough to make us properly care.

Edwards is clearly a talented film maker (his next film is Star Wars: Rogue One) but there isn’t much here to cling on to. The special effects are fine, but nothing we haven’t witnessed a few dozen times over. The father-son subtext is forgettable, as are many of the clichéd plot devices for this noisy, but underwhelming shrug-of-the-shoulders of a monster mash. 2.5/5