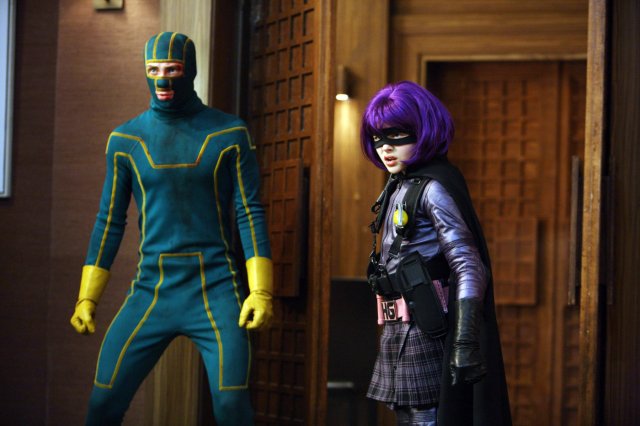 You have to be a little bit dead inside to not enjoy this one. Matthew Vaughn’s adaptation of Mark Millar’s graphic novel is a potent blend of styles and genres that takes the well-worn formula of the superhero film and subverts it with such glorious audacity that it out-marvels most of the Marvel fare. Bursting with colour and energy, with an adapted screenplay by Vaughn and Jane Goldman, the film is elevated higher still by an array of perfectly judged cartoon performances from Nicolas Cage, Mark Strong and the unforgettable Chloe Grace Moretz as the foul-mouthed pre-pubescent assassin, Hit Girl.

Kick-Ass ingrains itself in contemporary culture by using the inspired device of social media as a framework for its plot. Dave Lizewski (Taylor-Johnson) is a regular high-school teenager. He has no luck with girls and spends his spare time masturbating in his bedroom. In a world that borderline worships superhero culture, Dave decides it’d be cool if someone actually went ahead and became one. By way of a few beatings and a near-death experience, Dave becomes an internet sensation, which crosses his path with a ruthless gangster (Mark Strong) and the dynamic duo of Big Daddy (Cage) and Hit Girl.

Stylistically, it reminds me of Quentin Tarantino’s work on Kill Bill. It shares that same snap and brio – unashamedly serving violence up as a form of entertainment as the eleven-year-old Hit Girl goes about dismembering mobsters to the TV theme tune from the Banana Splits. Provocative and mischievous, Vaughn knows his film is going to draw criticism, but he does it anyway. It’s like the rebellion of punk rock all over again, pissing loads of people off and enjoying it in the process.

If you’re onside with Kick-Ass, it is about as much fun as cinema can be. Cage is as good as he’s ever been as a Batman-style vigilante, riffing on Adam West’s spin with his own brand of warped genius. Moretz is the real breakout, though. Hit Girl is counter-intuitive in every way, but she’s played with such a fascinating sense of maturity and naivety that you can’t help but adore her, even when she’s slicing people to bits with katana blades.

The final act raised a few goosebumps for me. The combination of a brilliantly shot action sequence, with an inspired soundtrack had me purring with admiration. This is a film with brass balls, but it is also full of a heart that affords its climax not just the satisfaction of an exhilarating finale, but one that strikes strong emotional chords too. Utterly brilliant.