Hannah and Her Sisters (1986) Film Review by Gareth Rhodes 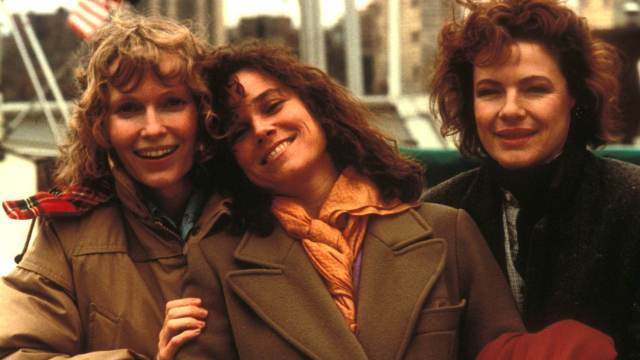 All writers repeats themselves eventually. Even the great ones. If you can regularly produce writing as great as Woody Allen, though, then people will be very forgiving. By 1986, we knew what to expect from an Allen film.  He did, however, reveal that he had learned a lot about writing for women through his collaborations with Diane Keaton, and it is here with Hannah and Her Sisters, a new New York set tale (where else?) of romantic, interwoven family ties, that Allen demonstrates his evolution as a writer for the opposite sex.

Hannah (Mia Farrow) and her sisters Lee (Barbara Hershey) and Holly (Diane Weist) are the titular characters of the piece. Essentially an ensemble piece, the film takes place between two Thanksgiving holidays, focusing on a complex series of relationships and characters. Like much of Allen’s work, the nearest tag you’d give it is ‘drama/comedy’, with Allen once again casting himself as a version of himself, and to be perfectly honest, stealing the film from under everyone else’s nose.

The film took home three Oscars at the 1987 ceremony, two of which were acting honours for Michael Caine and Dianne Weist in supporting roles. Yet, it is Allen himself who proves the to be the most enjoyable and impressive aspect of it, playing a hypochondriac with an existential crisis. In a sense, it is two films. One that focuses on Hannah and her sisters, and another starring Woody Allen playing Hannah’s ex-husband. Part of the problem, is that whenever Allen isn’t on screen, we miss him. All of the humour flows through his character, and his famous comic delivery is so well honed that it easily overshadows the drama shared between the rest of the cast.

In a sense, it’s like watching a comedy sketch show, waiting for your favourite character to appear. It sounds disrespectful to the fine ensemble cast,  but Allen’s neurotic turn is so much fun that it’s hard not to feel mildly frustrated with some of drama, which does struggle to make its mark. It should really be called ‘Hannah’s Ex-Husband and Her Sisters.