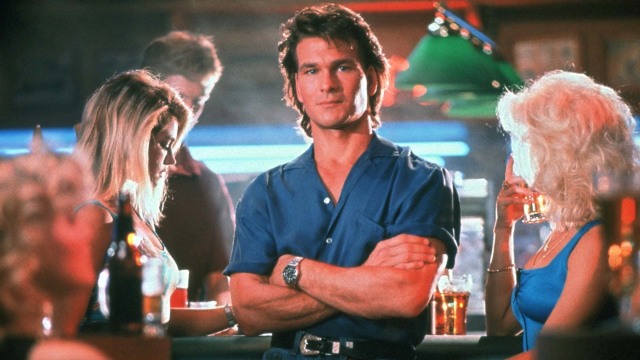 It’s hard to believe that Roadhouse was made with a straight face. Moreover, I don’t believe it was. None of anything that occurs seems to stand the test of common sense yet somehow there is an entertainment quality that elevates it above similarly stupid offerings.

Patrick Swayze is Dalton, a bouncer with an eye for a linen suit. He says things like “Nobody ever wins a fight“. He studies Tai chi. He lives in a peaceful barn conversion and he isn’t a complete idiot, unlike the majority of the townsfolk of ‘Jasper’, the fictional community in which the film is set.

A local businessman (Kevin Tighe) hires him to help “clean up” his bar, which seems closer to a fight club than a drinking establishment. All seems hunky-dory, until Ben Gazzara’s ‘Brad Wesley’, the local bully, takes umbrage and decides to declare war on Swayze and the bar.

The fight scenes are as ridiculous as you might expect, as are the consequences. Swayze is involved in numerous scraps along with some serious beatings, in which it seems easier to guess which bones haven’t been broken. The next day, he’s fresh as a spring lamb. Of course, it wouldn’t be much fun if he spent the whole film in hospital (he stitches his own wounds), but you see my point. Speaking of hospital, that’s where he meets Dr Kelly Lynch for the obligatory 80’s romance of the plot.

Despite an avalanche of stupid, the script for Road House is good fun, never better than when Sam Elliot appears halfway through the film to steal it from under Swayze’s nose. Lines like – “This place has a sign hangin’ over the urinal that says, “Don’t eat the big white mint” are delivered with a dry, but warm cynicism that almost makes you pine for a Sam Elliot spin-off movie.

In a sense, Roadhouse feels like all the naffness of 80’s action films rolled-up into one – a kind of end-of-decade celebration of the cheese-fest’s that were prevalent throughout the era. Both Patrick Swayze and Kelly Lynch look like they’re trying to finish off the ozone layer with the amount of hairspray it must have taken to keep their huge ‘do’s in place, while the blues-rock soundtrack, (mostly provided by The Jeff Healey Band), keeps the upbeat tempo.

Sam Elliott nicks it whenever he shows up. Swayze does a great job with the physical stuff. Some of incidental dialogue is hilarious. There are monster trucks. Fighting. Fighting. More fighting. Bottle blondes. Bottle fights. Nudity. Sleazy blues guitar. Throats being ripped out. Explosions. Tumbling polar bears.

And the director is called Rowdy Herrington. I think I loved it.