Posted on February 3, 2015 by garethrhodes 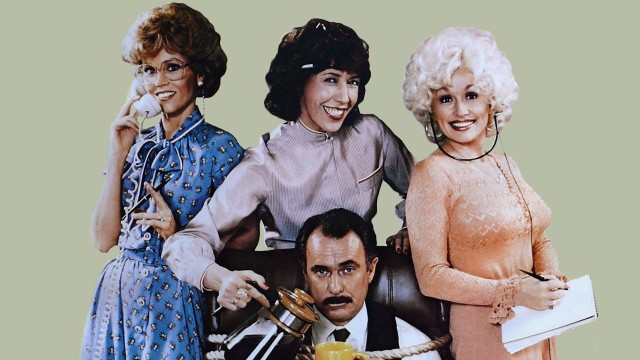 Colin Higgins ‘Nine to Five’ could be best described as a live-action cartoon about three women working for a male-chauvinist boss, and the ensuing malarkey generated by his wonky gender politics. The general tone of its humour flits between irreverent satire and slapstick. For the most part, it just wants you to have as much fun as possible, taking a wild swing at office life in the early 1980’s

Higgins, who also had a hand in co-writing the screenplay, orchestrates a four-pronged attack from an impressive cast starring Jane Fonda, Lily Tomlyn, Dabney Coleman and last, but most definitely not least, Dolly Parton.

Parton is a a joy, bringing her infectious smile and larger than life persona to the fore in a performance that further demonstrates the length and breadth of her talents. From her first scene, the famed country singer is a complete natural, holding the screen in an effortless manner, reminding us what a unique and charismatic performer she is.

Jane Fonda dampens down her own sex appeal to play a jilted wife, Plain Jane role – complete with over-sized glasses and shoulder cardigans. Narrow your eyes and she could be Grandma Fonda. Lily Tomlyn’s best moments come from her wry, undermining delivery – blending a little sour with Parton’s sweet. Pitted against such a formidable line-up, Dabney Coleman gives an enjoyably condescending turn as the ‘boss-man’, that acts as the perfect bait for the comedic talents of the female trio.

Initially, the fun of the performances, combined with the silliness make for an easy going watch. Unfortunately, the material starts to get stretched around the 45min mark, as the gag wears thinner and thinner and the plot escalates to new dizzy heights of daftness. It happens with so many comedy films. It doesn’t make the idea a bad one, it just highlights the difficulty of sustaining audience amusement over the running time of a feature length production.

While Nine to Five isn’t what I would call a comedy classic, it has something to offer, given the right mood. Like it or not, its famous theme song will surely get stuck on your internal jukebox. All together now…  3/5