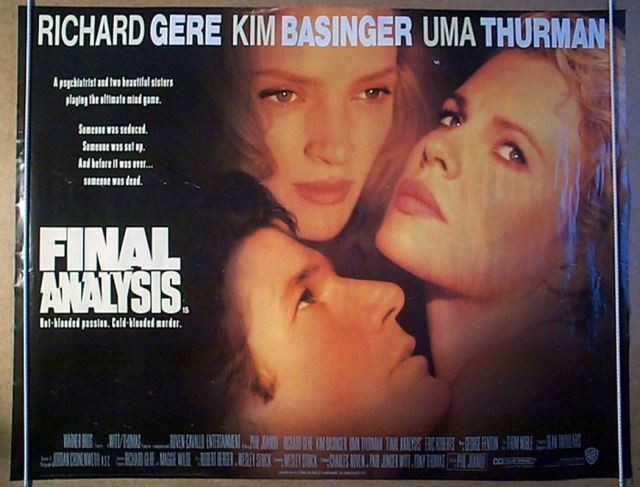 Directed by Californian film maker, Phil Joanou, Final Analysis is a twisty psychological thriller, made in the mould of an Alfred Hitchcock type offering, straddling themes exploring sexuality and seduction, with a touch of murder on the side. With a good screenplay by Wesley Strick, the film stars Richard Gere as a psychiatrist, going against his instincts by getting involved with a woman (Kim Basinger), who happens to be the sister of one of his patients.

Like Basic Instinct, that other, perhaps more significant psychological thriller released in 1992, Final Analysis is set in San Francisco, boasting regular shots of the Golden Gate Bridge to emphasise it. While it can’t escape its own incarceration as an inferior Hitchcock clone, it’s still mildly enjoyable on its own terms, thanks to Gere and Basinger’s willingness to commit to the material. Gere is a fine actor, one who seldom overplays a scene and once again, his measured display makes his character an engaging, if not altogether sympathetic presence.

That Gere’s character isn’t a straight up hero, brings a welcome sense of complexity to his role. It’s a talent he’s demonstrated in other, admittedly better films, but one that makes him eminently watchable in anything. Meanwhile, Kim Basinger brings trouble of all shades into Gere’s life, although the blossoming of their relationship isn’t really given enough time in the script, which to be fair, has its fair share of twists to start weaving.

While some of the plot developments border on the absurd, Joanou keeps the story moving fast enough to help paper over them. The climax is, how do I put this, very climaxy, taking place on a stormy night on top of a lighthouse in San Francisco Bay. While this kind of over-staging rubber-stamps the silliness, it just about creeps over the line of being a decent(ish) piece of Hollywood hokum. 3/5