Posted on January 3, 2015 by garethrhodes 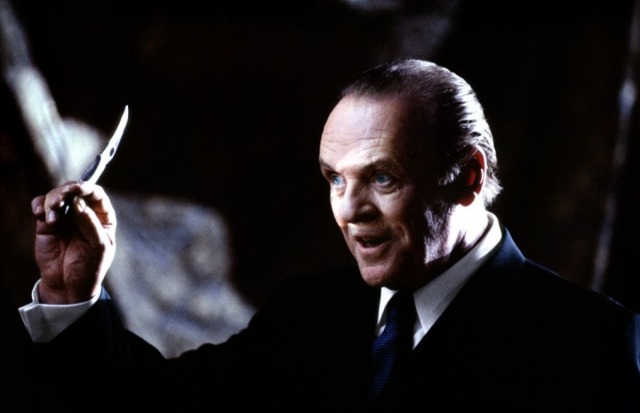 Between releases of The Silence of the Lambs and Hannibal, 10 years had passed. With any ordinary ‘franchise’ (a word Dr Lecter would consider ghastly), that’s an unusual amount of time to leave between instalments. In the case of Hannibal, however, the long silence only serves to heighten the interest as to what the not-so-good Dr has been up to all of this time.

Adapted for the screen by Steven Zaillian and David Mamet from the Thomas Harris novel of the same name, the film stars Anthony Hopkins as Hannibal. In terms of continuity with the previous film, that’s about as far as it goes. Disappointingly, Jodie Foster passed on the opportunity to reprise her role as Clarice Starling, as did Lambs director Jonathan Demme. Undeterred, the co-production team of Martha and Dino Di Laurentiis secured a double coup by convincing Ridley Scott to direct, and hiring Julianne Moore as Clarice.

Of course, with so much time having passed and change in key creative positions, we’re on very different turf. But then, Hannibal is a markedly different book to Silence of the Lambs. Where Lambs was sinister, with a real sense of foreboding to it, Hannibal paints its title character an anti-hero. Gone are the confines of his cell. This is the film in which we get to see him enjoying his freedom, indulging the finer things in life. Essentially, it is a much broader experience, as we catch up with Dr Lecter assuming another identity in Florence, Italy.

With Ridley Scott’s direction, Hannibal feels more cinematic and exotic than Lambs. That said, it is less impactful than its predecessor, in that the central character is less enigmatic and overall, the tone is glossier and shot with the same pace and spirit of a popcorn movie. Anyone familiar with the book will know what to expect, and while certain things (Mason Verger’s sister) are omitted, the adaptation is a very good one.

In the title role, Anthony Hopkins embraces the material and has a lot of fun. Thanks to the shift in tone, it’s a lot easier to accept Julianne Moore as Clarice, and as she has demonstrated many times before and since, Moore is a fine actress, capable of making a part her own. Aside from a great cast, which also features Gary Oldman and Ray Liotta in pivotal roles, the film is given additional power and scope by Hans Zimmer’s  musical score, which features the spine-tingling Vide Cor Meum. It is a haunting, yet immensely powerful piece of music which not only describes great beauty, but that also has a mournful quality which adds great depth and helps inform the characters.

Upon release, Hannibal received mixed reviews. Granted, it doesn’t have the same intense power of Silence of the Lambs, and it isn’t really scary at all, but to Scott’s credit – it has its own identity aside and makes for an elaborately enjoyable cat-and-mouse thriller. 4/5