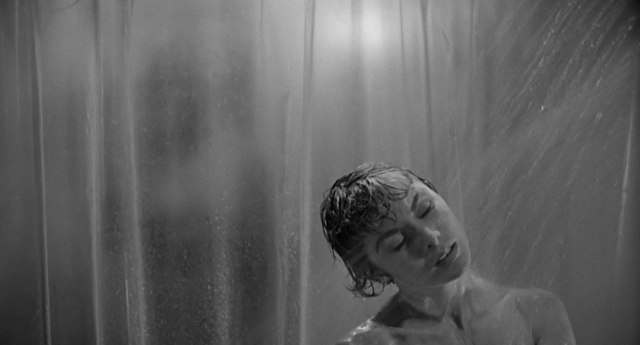 I recall reading a magazine interview of David Fincher some years ago, in which he discussed “films that scar.” Jaws was one such film, as was Alfred Hitchcock’s seminal thriller, Psycho. With a screenplay by Joseph Stefano, adapted from a novel by Robert Bloch, Hitchcock’s film remains as alarming as it ever was. It might also make you think twice the next time you step into the shower.

This isn’t a film that requires much of a plot set-up, however, the single event that sets the plot in motion involves Janet Leigh stealing $40,000 and going on the run. Unfortunately, most of the world is now all-too familiar with that bathroom scene, which as a first time viewer, is what we’re waiting for. I’m sure Hitchcock would prefer it if the scene hadn’t been replayed as an isolated moment so many times over the years, but still, it’s a compliment to his brilliance that academics and film lovers alike share a continued fascination with his work.

However familiar you are with that scene, it won’t stop your heart pounding out of your chest when you see it within the context of the film. With Bernard Herrmann’s iconic strings for accompaniment, and George Tomasini’s rapid-cut editing, the sequence remains shockingly horrific to behold.

Beyond what has become iconic, Psycho is a monumental film. Not only is it home to good performances from Janet Leigh and Martin Balsam, it also features one of cinema’s most celebrated turns from Anthony Perkins as Norman Bates. Hitchcock cranks up the tension, set against a sinister backdrop that creates a thick sense of palpable threat.

Best watched alone, this a thriller that has been informing cinema since its release. One of Hitchcock’s defining pictures, Psycho is evidence of the true master of suspense at work. 5/5