Out of the Past (1947) Film Review by Gareth Rhodes

Out of the Past (1947) Directed by Jacques Tourneur. With Robert Mitchum, Jane Greer and Kirk Douglas. 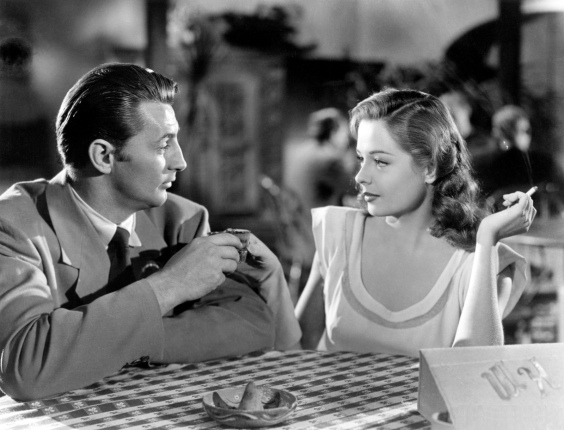 It was a cold, damp and misty Thursday evening, and well, I just fancied a dose film-noir. Who would have thought the lowly TV channel, Movies4Men would come to my rescue, but in stroke of great timing, a screening of Out of the Past was scheduled for 4pm. So, I poured myself a stiff one and settled back into 1947, with Robert Mitchum and Jane Greer for company.

Adapted for the screen by David Mainwaring from his own novel, ‘Build My Gallows High‘, and directed by Jacques Tourneur, this is perhaps one of the finest early examples of the film noir genre at its quick witted, twisty best. Robert Mitchum is the personification of laconic cool as he’s reluctantly drawn back into a world he once knew, but since escaped. The plot sees his character pitched into a complex tangle of romance, deception, and ultimately danger, as he relies on his wits to outfox hoodlum, Kirk Douglas.

Mainwaring’s script is a delight, bubbling over with snappy witticisms and chemistry, particularly between the magnificent no frills, Mitchum and the calculating Greer. Not only that, the film has a wide sense of scope, as it spans across all manner of locations including San Francisco, Nevada, Mexico and Los Angeles. Between Jacques Tourneur’s direction and Nicholas Musuraca’s photography, the piece is crammed with shadowy suspense and menace making for compelling viewing from the first second to the last.

1947 might seem a long time ago, but when cinema is this good, Out of the Past is in the present as much as anything. With fine performances and a pearl of a script, it is a must-see, not only for academics tracing the origins and styles of cinema, but for those in the mood for a riveting, ambitiously made, classic experience. 4.5/5