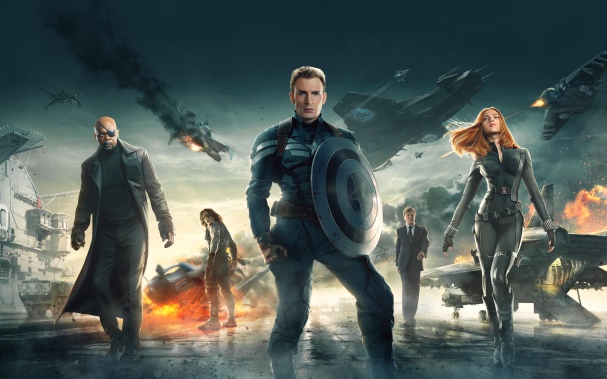 Thanks in part to Joss Whedon’s raising of the bar that was, Avengers Assemble, this ‘second wave’ of Marvel Comics screen adaptations are gaining momentum. The brothers Russo take the distinctly one-dimensional character of Captain America, and turn out a pleasingly multi-dimensional film, influenced heavily by 1970’s conspiracy fiction with double crossings and false identities, amid an exciting collection of highly impressive action set pieces and the now trademark witty dialogue.

Chris Evans reprises his role as ‘Cap’, and is complemented well by Scarlet Johansson’s ‘Black Widow’. This pairing works so well for exactly the same reason that Whedon’s Avengers team-up played so invitingly. Both characters are the antithesis of each other. Cap is the do-gooding, American idealist with a life spent telling the truth and rooting out the bad guys. Black Widow is a character who trades in seduction, lies and deception, as her strongest weapon. It’s a smart move to buddy them up, and makes for some great moments – not only of flirtatious dialogue between the pair, but also as an added facet of intrigue to a plot filled with twists and turns.

There’s something vitally refreshing about this instalment of the Marvel series. Not only does it take the entire plot forward, it does so while being its own film at the same time. Of course, it can’t scale the same emotional heights as Christopher Nolan’s Dark Knight trilogy, but there is occasionally, amid the fun, a sense of peril and suspense for the characters. Adding further gravity to proceedings are seasoned veterans Samuel L. Jackson (Nick Fury) and Robert Redford, both of whom, contribute vastly to a plot that makes the most of their presence.

After the disappointment that was Captain America: The First Avenger, all is well and truly forgiven. Not only does this sequel do a great job of furthering the interest in the story of Captain America, it makes the overall Marvel Universe a more exciting place. 4.5/5