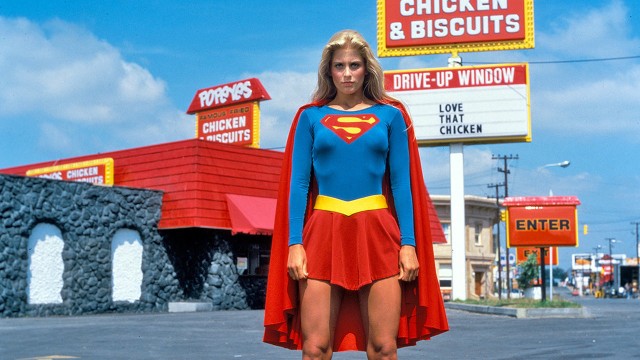 This colourful Superman spin-off, follows the adventures of Kara Zor-El, and her visit to Earth in search of a powerful orb – a crucial power source for a colony of surviving Kryptonians. Sadly, you won’t believe a girl can fly, this time. I take no pleasure in saying that, but it’s difficult to ascertain just who this film was made for. In the end, those likely to salvage any enjoyment, will be a rare mix of nostalgia buffs and the ‘so bad it’s good’ brigade.

A wide-eyed Helen Slater takes the titular role, and proves a good fit for the iconic costume, however she isn’t given enough to play with, leaving the character disappointingly one-dimensional. Slater is impressively supported by Peter O’Toole and Faye Dunaway, who seem to enjoy themselves, but are unable to stop the rot of a script that deserves banishment to the Phantom Zone.

It’s a strange one. Unlike the 1978 Richard Donner Superman film, which took its sweet time telling an origins tale, this has no patience with itself whatsoever. It’s like the producers just can’t wait to get the girl into the outfit, disregarding any need to set-up the story. In the scattered ashes of any potential, what remains is a bungled mess.

Although Jimmy Olsen (Marc McClure) drops in to help stitch it into the Christopher Reeve continuity, the ‘Man of Steel’ himself apparently declined to be involved from a very early stage, which given the end result, proved a wise move. It’s sad to see it fail, though. In 1984, cinema would have benefited from a prominent female action hero. Composer Jerry Goldsmith tries his hand at helping the character fly, something John Williams achieved, masterfully. Regrettably though, they fail to make her truly soar. 2/5