Posted on February 9, 2014 by garethrhodes 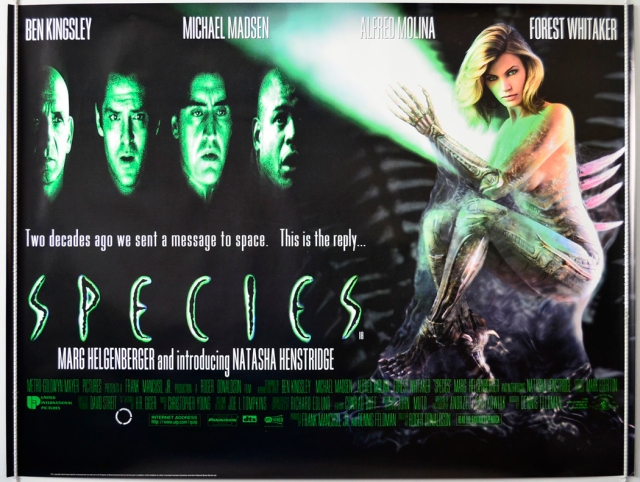 Roger Donaldson’s Species is a pervy sci-fi thriller about a genetically engineered creature (a young Michelle Williams) that escapes from a US research lab, which then proceeds to go on the hunt for a suitable mate to further its kind.

The creature in question rapidly grows from child, to former fashion model, Natasha Henstridge, a woman of certain physical attributes that director Donaldson captures in full, panoramic view. Armed with the potent weapon of stunning beauty, her character, Sil, sets about a mission of searching Los Angeles hotspots for a man worthy of impregnating her.

Heading up the team to hunt Sil down is Ben Kingsley in a performance that could be the very definition of ‘phoned in’. The celebrated actor looks like he can’t be bothered, even his dodgy American accent is a weird confusion of regions. Michael Madsen plays a variation of his Reservoir Dogs character, while Forest Whitaker and Alfred Molina serve as nothing more than names on the poster.

In the end, despite the involvement of Giger, Species is nothing more than an exploitation movie with a $35m budget. Big name actors look dazed and confused, but there is some fun, here and there. 2.5/5