Posted on October 1, 2013 by garethrhodes 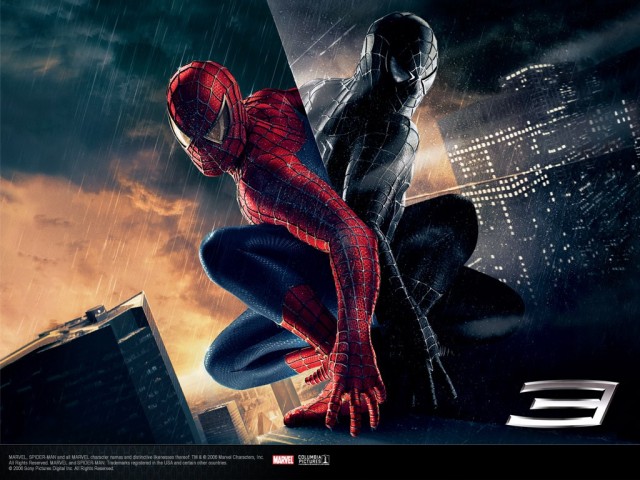 As any soccer fan will testify, there are few things more frustrating than seeing your beloved team miss a glaring open goal. There you are, poised for celebration, only to have joy snatched away thanks to a crazy lapse in concentration by your trusted star striker. In many ways, this analogy can be aptly applied to Spider-Man 3, Sam Raimi’s confused conclusion to what had thus far been a satisfying take on the Spidey mythology.

Where did it all go wrong? Well, that’s just it. The pieces were in position – the tricky origin tale had been successfully negotiated, the sequel achieved that rare feat of improving on what came before…this was supposed to be the crowning lap of honour.

Firstly, the villains are by far the weakest yet. Thomas Haden Church has virtually nothing to do but stand around looking lost. His character, The Sandman, is feebly tacked-on to bring the Uncle Ben murder mystery full circle. Furthermore, the second villain, Venom, a fan-favourite and great opportunity to create a dark and fresh and exciting aspect to the series, is squandered with some head-scratchingly weak plotting. It’s doubly disappointing considering Raimi’s knack for the horror genre, indeed, his focus never truly settles for the entire duration leaving a film that feels like little more than two hours of being battered by digital effects and worn out story ideas.

On top of that, Tobey Maguire, quirky and unorthodox in the first two films, has now been demoted is just plain annoying. His grasp on the character slips altogether when he’s asked to engage his dark side (for best results see Christopher Reeve in Superman 3) as he finds himself influenced by an alien goo that manifests Venom later in the film. Maguire wasn’t always the popular choice, even after two successful films, but he gives his naysayers plenty of ammunition with some painfully embarrassing moments as Peter Parker gets down with his bed self, strutting around New York like a bad John Travolta impersonator, culminating in both actor and character looking quite silly.

Add to all this more of the same repetitive dialogue about doing the right thing from Rosemary Harris as Aunt May (still irritating), James Franco’s increasingly plodding turn as Harry Osbourne and Gwen Stacey, MJ, Harry, and Peter Parker all involved in a tiring game of on-off-love-hate…and you’re interest curve begins a fast descent.

Standing back and taking it in, it looks for all the world that Raimi just didn’t have a clue how to wrap it all up. The classic ‘too many cooks’ scenario is played out to the clear detriment of the piece, as what should have been a fulfilling finale is reduced to a batch of underdeveloped ideas that look rushed into to production, missing all the story and character opportunities set-up by the second film.

In the end, it was a box office smash, thanks to the success of earlier films paving its way, but many who saw it, myself included, left disappointed and confused. A messy ending to what had been an entertaining series.  2/5