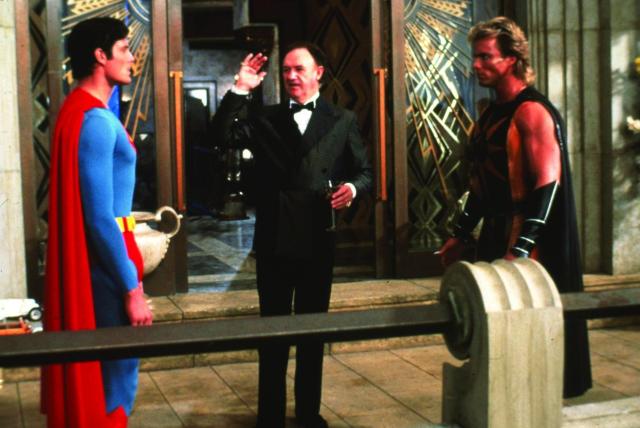 After the disappointment that was Superman III, you might be forgiven for thinking things could only get better for part IV. Think again. In a film so unbelievably bad, it’s all the more strange to see the main players from the original ’78 Superman back in character. Gene Hackman and Margot Kidder, all but missing for Part III, return as Lex Luthor and Lois Lane. Unfortunately, as is evidenced, quality casting is redundant if script, direction and overall production values are as poor and low as here.

In the directors chair is Sidney J Furie, perhaps best known for The Ipcress File and the Iron Eagle series. His direction is flat and offers no style or substance to build on things we learned from the previous adventures. The plot, which has Superman decide to rid the world or nuclear arms, is laboured and of its time. Released in 1987, a few years before the end of the Cold War, it has stern ambitions of making a profound political statement. That would be fine, if everything else didn’t suffer so badly as a result. Alas, Richard Donner’s verisimilitude has long since flown the nest.

Threatening to bring some fun to proceedings is Mark Pillow’s ‘Nuclear Man’, but his one sided, monosyllabic character offers no more than unintentional laughs as he goes one-on-one with Christopher Reeve’s bewildered looking Superman.

The saddest thing about Superman IV is not the performances or the woeful script, it’s witnessing something that was once special, die on it’s backside. The special effects are the 80’s equivalent of Ed Wood’s ‘Plan 9’  as black drapes act as outer space, and yes, you can see all the wires. Contributing to the farce, is the wanton disregard of any sensible logic. Indeed, there’s even a moment when Superman flies in space with a human character, who is completely unharmed by the experience.

I could literally sit here all day and pick through everything that’s wrong with Superman IV. For fans of the Richard Donner original, it’s a depressing experience that makes a laughing stock of the most iconic super-hero incarnation. 1.5/5

1 Response to Superman IV: The Quest For Peace (1987) Film Review by Gareth Rhodes