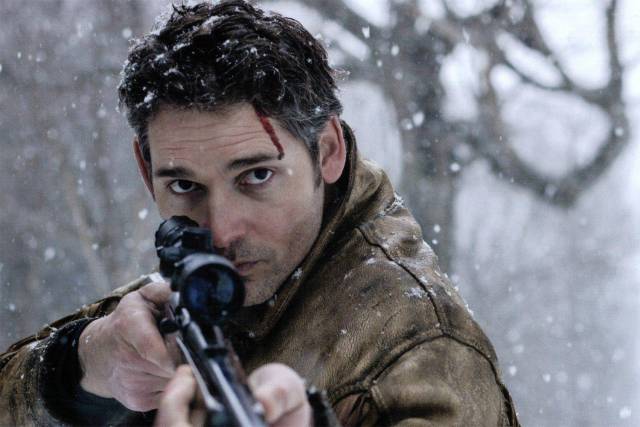 Stefan Ruzowitzsky’s Deadfall is that frustrating thriller that tries to succeed on an emotional level, yet is hampered by far too many contrivances for its own good. After a strong introduction, during which we meet Eric Bana and Olivia Wilde’s brother/sister team, fresh from a lucrative casino heist – the director attempts to spin an intricate web of characters and family orientated strife, that you just know from the outset, is going to culminate in some kind of final-stand reckoning. Underlining that sinking feeling of having to sit through telegraphed plot points, is that this all takes place on the biggest family day of the year, Thanksgiving.

What further contributes to the frustration is that the film is well shot, on some great Montreal locations, with gifted actors all of whom belong in a better film. Sissy Spacek’s effortless warmth, Eric Bana adding some of that much missed ‘Chopper‘ menace and Kate Mara’s spirited underdog all stand out. However, veering wildly off course is Charlie Hunnam and Olivia Wilde’s snowy dalliance, which is cheapened by two cynically placed sex scenes. It’s this kind of crass, painfully obvious story inclusion that saps the film of credibility.

The through-line of the entire film – sticky father/child relations with a side order of incest – is frilled up with a series of work-a-day set pieces that do little more than join the dots of what is a disappointing thriller that struggles to match its own eye-catching introduction. 2.5/5