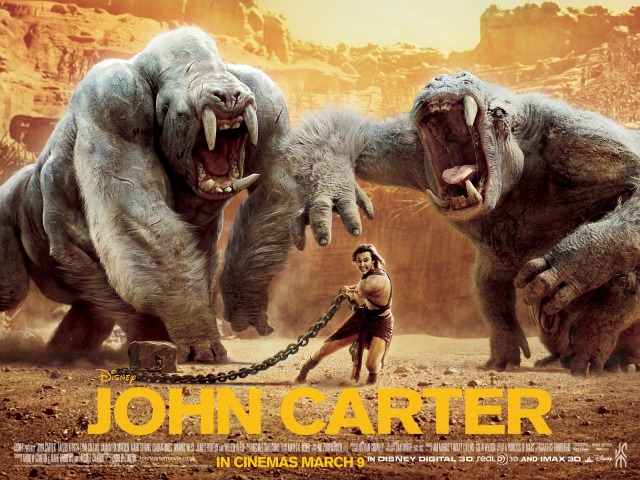 I could write a very short and concise review for John Carter (of Mars) which would read something like this – ‘it’s rubbish‘. However, in the spirit of fairness toward those who worked to bring this ‘epic’ story to life, I shall endeavour to go further into detail.

Co-writer and director Andrew Stanton’s film an absolute mess. While it clearly pines to be Star Wars, Indiana Jones, Avatar, hell, even Mike Hodge’s Flash Gordon, it falls a long, long way short, and survives only to be seen as a misjudged experiment. When Flash Gordon was released in 1980, it was immediately panned by critics and flopped, but has since evolved into something of a cult favourite among fantasy and sci-fi fans. Will the same ever be said of John Carter in the years to come? I wouldn’t bet on it.

So, what when wrong? Well, for starters, it’s boring. It has no depth of character and the hero’s journey, like TRON:Legacy a few years ago, never does enough to convince or make you care. John Carter himself is dull. Actor Taylor Kitsch, last seen bombing at the box office in Battleship, has surely consigned himself to starring in direct-to-DVD releases after two monumental flops. On that level, I have sympathy for the actor as while his performance does nothing to stand-out, I would suggest even the most charismatic screen presence would struggle to get a foothold amid such a sea of CGI banality.

From a visual perspective, there’s lots of activity, but none of it registers as being particularly interesting or for that matter, involving. Just like the Transformers sequels dulled our senses by attacking us with a fireworks display of digital trickery, John Carter falls down the same pothole. I’m a firm believer that any film heavily reliant on being a ‘visual feast’ is often making up for shortcomings in character and story…certainly the case here.

Disney has recently acquired the keys to the Star Wars kingdom. John Carter could prove to be the best thing that ever happened to Star Wars, for Disney would be foolhardy to repeat the same mistake twice. Considering just how much time, money and effort went into making this film, it survives as a wasteful and tiring effort that’ll test the endurance of anyone who hasn’t had the recommended 8-hours sleep the night before.  1.5/5