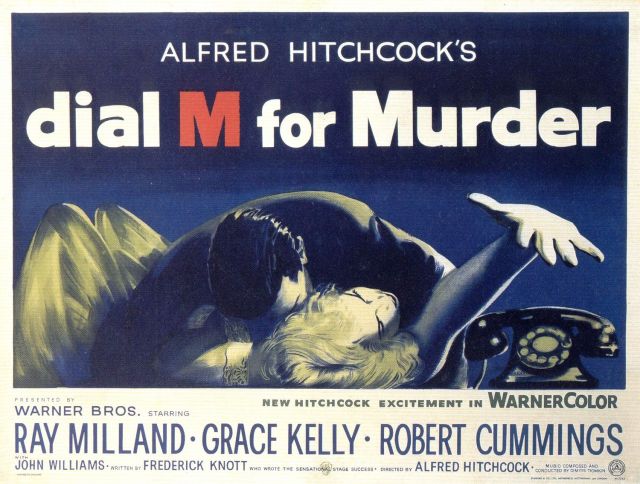 Originally a successful stage production by Frederick Knott and subsequently adapted for the screen by the legendary Alfred Hitchcock, the beauty of Dial M For Murder, apart from the hypnotic sight of Grace Kelly, is its complexity born out of simplicity. It is simple in the way that the entire unfolding of events occurs almost entirely in one apartment room location, and complex in so far as the elaborate plot moves forward through chillingly polite conversation and cleverly applied suspense.

The set-up is simple. Tony Wendis, a retired tennis player, discovers his wife Margot, is having an affair and decides to plot her murder with the help of a local crook who he enlists via a complex blackmail.

As Wendis, Ray Milland’s performance is a delight to behold as he politely goes to work spinning a murderous web only to find himself having to try and spin his way back out of it. As his wife Margot, Grace Kelly is a stunning physical presence (who’d want to murder her!?) and positively lights up the screen whenever she takes to it. Supporting roles are also well filled by John Williams as a kind of Sherlock Holmes detective and Robert Cummings as Margot’s not so secret lover.

While not as visually dynamic as Vertigo, Hitchcock sensibly permits his actors to tell the story in an under-stylised and naturalistic way which helps reinforce the fly-on-the-wall feeling from an audience perspective. Hitchcock occasionally shoots from ceiling high angles, looking down on the conversations which give off an intriguing CCTV effect.

In the end, dialogue and performance are king here as we, the audience, accompany Tony Wendis through his intricate plan of wrong-doing.  The suspense lies in his ability to not only successfully carry out the murder his own wife, but the aftermath of the events that surround it. The stage origins are embraced and the actors deliver in spades. It might not be the most studied and celebrated Hitchcock in terms of camera techniques and innovation, but it’s right up there with his best. 5/5