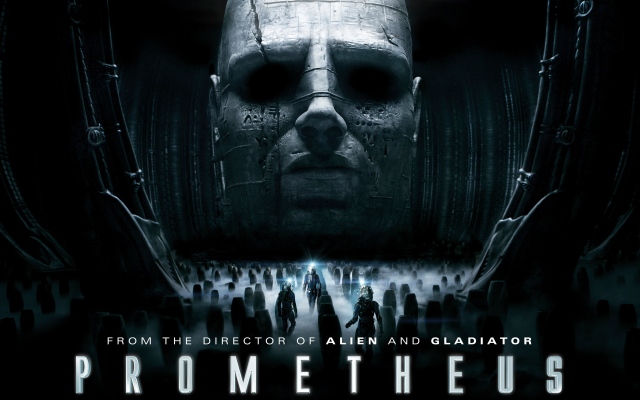 Ever since George Lucas drop-kicked me in the privates with his Star Wars back stories, the word ‘prequel’ has been a dirty word in the Rhodes household. Fast-forward a few years, and so comes the announcement that my other favourite sci-fi series is getting a prequel with its original director, Ridley Scott, at the helm. Now, I’ve always been a ‘take-the-story-forward‘ kind of chap, particularly in science fiction, a genre which I believe like science itself, should always be pushing the boundaries to make new discoveries. In this case, I’m glad to say that I’m completely and utterly wrong. In my view Ridley Scott has achieved the impossible and created something unique and fascinating that not only works as an exciting film in terms of the discoveries it poses to your average ‘Alien’ fan, but the way in which it engages the brain on a subject far bigger and wider than I would ever dare to dream – the very creation of mankind itself.

Scott’s love for his own baby, the much celebrated masterpiece Alien, is plainly evident. From the start, the film looks beautiful and the production design is as jaw-dropping as anything I have seen in sci-fi. As the years have passed, the Alien series has become a dumber and less mysterious place to live. While never able to harm the lasting legacy of Ridley Scott’s teasured original, the much maligned Alien Vs Predator spin-offs have gone a long way to reducing the on-screen power of the Xenomorph and for my money, they doesn’t deserve the association.

What’s immediately noticeable about Prometheus is that it is a confident, well thought out film with its own story to tell. Scott’s ideas, while maybe too grandiose for some, are brimming and bubbling all over the place. Levels of expectation these days are hard to meet, and many that have turned against Prometheus seem to have done so because it isn’t Alien. Did they really just want to see Sigourney Weaver running round a ship with a flame-thrower all over again? Don’t get me wrong, I love those films, but after all these years, I’m ready for a new adventure and it’s thrilling to find out that Scott is in the mood to give us one.

Performance-wise, the tone is quite similar to that of the crew of the Nostromo. Everything is deftly muted, wise-cracking and mildly distrusting between colleagues and there’s that initial period of working out who’s the good guy. If there is a Ripley here, then it’s definitely Noomi Rapace’s ‘Elizabeth’, whose basic instinct for survival strikes a strong connection to Scott’s original film. Other main players include Charlize Theron, herself a strong-headed, play-it-safe Ripley type, Idris Elba as the ships Captain and last but not least the excellent Michael Fassbender as the ships android, David. Fassbender occupies his role with relish and conviction, sitting comfortably aside Ian Holm and Lance Henricksen as yet another beautifully carved out portrayal of an ‘artificial person’.

Everywhere you look in Prometheus, there are ideas. Even down to the smallest details, it seems nothing has been left to chance. There is the sense that you are on a mission of discovery with this crew, and while modern CGI allows for more visual exploration than was possible 1979, it’s cleverly applied alongside some stunning scenery and sets to make for a hugely involving two hours of sublime science fiction. Of course, there are those who feel differently, and anyone without a basic love or understanding of the original Alien film might not feel quite as warmly towards this as I do. But I believe in time, this film will find its place as a classic within its genre and deserves to sit aside Alien and Aliens as a film that operates strongly on its own terms.  4/5