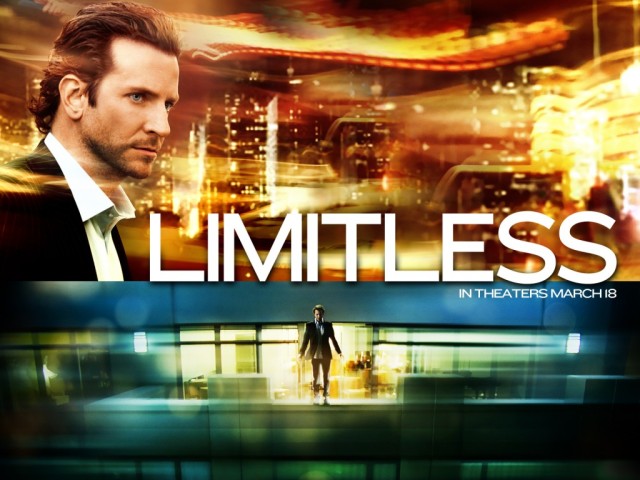 Based on a novel by Alan Glynn and directed by Neil Burger, Limitless is a slick, high concept thriller that might be likened to flicking through the pages of a glossy table-top magazine. That’s not to say it’s a bad film, indeed while it’s in front of you, much of it is lightly engaging and visually energetic,  but at no point does it ever succeed in burrowing under the surface.

Front and centre is Bradley Cooper, a new ‘A-lister’ of sorts thanks to the phenomenal success of ‘The Hangover’. He plays Eddie Morra, a depressed author struggling for motivation who as we meet him is in the process of being dumped by his dissatisfied girlfriend (Abbie Cornish). Then, through a chance encounter, Eddie is offered a drug that enables him to access the dormant, un-engaged 80% of his brain power with amazing results.

Where Limitless fails to register is in it’s refusal to veer off the beaten track of so many standard formula thrillers that have come before it. Yes it breezes along, slightly over staying it’s welcome – but for the most part Neil Burger just carefully guides his ship put of the harbour in the most risk free and forgettable way. Everything that occurs feels like a repeat of something else re-packaged and held aloft as something new and shiny. Cooper just about holds his own as a leading man, although the brief presence of Robert DeNiro, in yet another of his bewildering choices of roles does threaten to upstage him.

So, although there is a sense that something deeper and more interesting was bubbling under the surface of this idea, the execution could be the very definition of the term ‘safe as houses’. All involved come away with a par, including us. 2.5/5