Posted on September 13, 2012 by garethrhodes 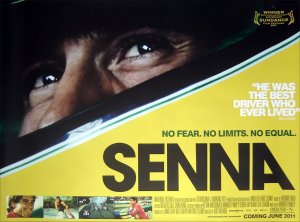 Before seeing this documentary, my knowledge of and interest in Formula One racing were pretty much on an even keel, borderline non-existent. For anyone wondering if you need to have a love or history of understanding of the sport in order to get full value out of Senna, then the answer is no.

This is a story of a human being with such enthusiasm and passion for the thing that he did, that success on the racetrack was the difference between personal happiness and life failure, and it’s a story that accessible to anyone and everyone. Film-maker Asif Kapadia lovingly traces the Senna story back to his days as a go-kart racer in his native Brazil through to his years of struggle against the politics and backstage goings-on that both frustrated and willed him on, to the eventual tragedy that befell him and brought an untimely end to his life and career.

Often in this glimpse into the significant events of his life, Senna appears to be a man battling with himself while trying and  seemingly failing to achieve personal satisfaction. His increasing rivalry with French driver Alain Prost is fascinating and showcases the personal pressures that loom large over anyone fighting to be and stay the best at what they do. Prost is suspiciously painted as the villain of the piece as the two men, who are initially team-mates, eventually become bitter enemies in their respective quests for domination of the track. What seems evident is that Prost was not as talented a driver as Senna and although had buckets of charisma of his own, was more integrated into the politics of Formula One. Given the film-makers clear love for Senna, it’s hard to take the angle on Prost at full face value although i defer to anyone with better knowledge or experience of the times.

What this documentary doesn’t try to do is to delve very far into the personal life of Senna to try and reveal more about the man. We see small snippets of family home video and fleetingly glimpse him with a significant woman in his world, but these are mere backstage glances while the main focus remains firmly fixed on his life in the car. What’s particularly pleasing about the film is the way in which Kapadia captures the fandom and love that exists for Ayrton Senna in Brazil where his inspiration was felt far and wide. A country with huge social and economic problems, Senna was a beacon of light and an individual cause of national hope and pride. Very much like ‘When We Were Kings’ did for Muhammed Ali, ‘Senna’ successfully creates a portrait of a great man fighting to stay great, and all the while at the back of your mind, you know the story won’t end well. Fascinating and hugely emotional in equal share. 5/5