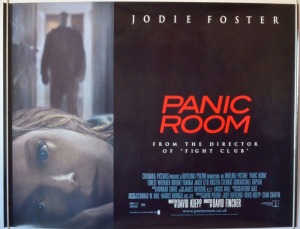 Through the eye of David Fincher and the pen of David Koepp comes this simple, but highly-polished home invasion thriller – that while being one of its director’s more incidental films, is still a competent effort with more than enough to recommend it by.

Meg Altman (Foster) and her daughter Sarah (Stewart) have just moved into their new Manhattan pad. Built into the master bedroom is a state of the art panic room and – whaddya  know!? – on the first night there’s a break in.

Just like in his previous feature film Fight Club, Fincher uses CGI to create some otherwise impossible visuals as the camera prowls and glides around the huge house with an eerie grace, prompting some good early tension. However, once the break-in happens and we get acquainted with the invaders, much of that tension dissipates. Indeed, there’s one comical moment in which a slightly burned Jared Leto reacts in a way that recalls the bungling burglars of Home Alone. Thankfully, a menacing turn from Dwight Yoakam ensures the balance is never quite tipped too far that way.

Like all good survival horror, Panic Room works like a fun puzzle, as it often gives us the opportunity to consider what we might do in similar circumstances. While in terms of classic status it could never be mentioned in the same sentence as Se7en or Fight Club, inventive direction ensures its place as a functional suspense-thriller, which means it stands tall in a long line of disposable Friday night popcorn rentals. 3.5/5